Knowing the Difference Between Different Types of Kratom

Many people have questions about all the different types of kratom, especially if they’re new to the industry. The different varieties of kratom will all have slightly different ranges of alkaloids, depending on where it is grown. People tend to buy each type for different reasons. Everyone has their preferred type of kratom, and someone else’s favorite may not necessarily be yours. Get started by learning more about the four main types of kratom: red, green, white, and gold.

Indigenous peoples in Southeast Asia have already been harvesting kratom leaves for hundreds (if not thousands) of years. The botanical name for this tree is Mitragyna Speciosa. It is regarded as an herbal plant in many parts of the world. Some consumers report buying it for euphoric and stimulating effects, while others report that they turn to kratom when they’ve been experiencing discomfort. Some people have even said that small amounts of kratom are stimulating, while larger amounts are more relaxing, depending on the type. Both of these reasons help explain why it’s been so popular with farmers in parts of the world where it grows naturally.

It’s important to keep in mind that everyone’s body and brain chemistry is a little bit different. For that reason, people have reported having completely different experiences with kratom, even with the same type. That said, there are different types of kratom that each have their own reputations. The four general categories of kratom include the following:
• Green Vein Kratom
• Red Vein Kratom
• Gold Vein Kratom
• White Vein Kratom

Many people who become interested in kratom for relief tend to gravitate toward the red variety. Some people have said they buy red kratom when they’re in pain or wanting to relax. People typically don’t talk about red kratom when they want more energy. 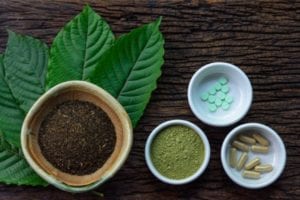 Gold kratom is somewhat similar to red kratom in many ways. Some people have said they get gold kratom instead of a red type when they want to feel relaxed but be euphoric. People in some parts of the world like gold kratom if they have anxiety or pain or would like a mood boost.

White kratom isn’t as closely associated with relaxation as some other varieties. People typically report buying white kratom when they have depression, are very tired, or want to boost their productivity. Mitragyna Speciosa does come from the Rubiaceae family, after all, which is the same family as the coffee tree.

Here at Gold Leaf Botanicals, every product on our site is wild-grown, naturally grown, kratom. Our kratom is harvested by hand deep in the jungle of Indonesia, far away from pesticides and other chemical compounds that could taint the final product. Wild kratom is harvested without the use of chemicals, and it grows naturally in wild forests instead of in a plantation environment. This makes it perfect for people who want to feel more connected with a natural experience. Shop for kratom online today for fast, discreet deliveries, or contact us if you have any questions.